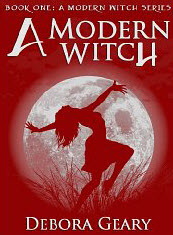 I've been reading a few fun and quirky paranormal books as of late and that was what I was expecting when I found Debora Geary's A Modern Witch. But I can definitely tell you that this one was way more than what I was expecting...and in a very good way!
I was hooked almost immediately with Lauren and her friend Nat. I don't know if it was due to the fact that the story was based in Chicago and Berkeley and the fact that I used to live near Chicago growing up as a child and I live near Berkeley now. (How uncanny is that?) Perhaps it is due to the fact that there are so many other elements in the story that I could relate to...family, similar to those portrayed by Nat's family and by Nell, Jamie, Sophie, Aunt Moira, Jennie, little Aervyn and the rest of the clan. I know what it is...it's because Ms. Geary has weaved in the new (modern) elements of today's real life with history, tradition, and a deeper understanding of the things around us and how they can enhance our lives.
Actually, I think it is really all of the above and so much more. I really felt that the story was believable in the sense that perhaps there really are people out there that have "gifts" that they don't really understand but somehow have tapped into them in order to make their lives easier. Whether one could call that being a "witch" is subject to the "user" and if they choose to believe in it or not. I am sure that there are many "users" out there that hold very strong beliefs.
The vivid descriptions of what Lauren goes through as she learns to harness her newly found powers is extraordinary. There were points throughout the story truly made me feel that I was standing/sitting right alongside her as the developments unfolded. This was especially so during the big circle gathering when Lauren was finally able to show the family that she was up to being little Aervyn's channeler. Their kindred spirits are entwined with love and trust for each other and themselves.
Now as much as I would love to tell you what little Aervyn does during the circle, I won't! You'll just have to read the story for yourself. But I will say this, it was not at all what I was expecting! In fact everything that little Aervyn does is not what I would expect a four year old to do, but that is what makes him a truly loveable character.
One of the things that I love about this story is seeing several women really come across as being strong and independent, yet loving and family oriented. Not a lot of mushy romance, but more real life with a bit of mystical, magical and surreal moments. I really didn't want the story to end and am glad there are more books in this series.