If you would like a pumpkin pie with texture instead of a pureed can, then here is what you do. Get a pumpkin. Depending on how many pies you want will determine the size. You can use a sugar pumpkin or a regular pumpkin, which can be had at a bargain slightly before Halloween.

Cut the pumpkin in half and remove the seeds and pulp. Cut the halves in half and place in a cake pan. Add water to the pan and cover with aluminum foil. Bake at 350 degrees for 1 1/2 to 2 hours until a fork can be inserted all the way thru the pumpkin.

Remove the pumpkin and let it cool. Scrap the meat out into a bowl and mash with a potato masher. Place 2-3 cups in a flour sack towel and squeeze out as much water as you can. Set the water aside for to use in your pumpkin bread if you want. Your pumpkin is now ready to be made into a pie.

For one 9 inch deep dish put 20 ounces of pumpkin by weight in a mixing bowl. Add half a cup of white granulated sugar, half a cup brown sugar, firmly packed, one 12 oz can evaporated milk, 2 eggs and combine until thoroughly mixed. Add:

Mix all until consistently incorporated.

Fill one 9 inch deep dish pie shell and distribute evenly. Your mixture should be fairly thick and will need to be spread out with a spatula or the back of a large spoon. Bake for 15 minutes at 400 degrees, then reduce the oven temperature to 350 degrees and bake for an additional 45 minutes or until a toothpick inserted in the middle comes out clean.

Remove the pie from the oven and let cool. Serve with real whipping cream.

This is a fairly spicy pie. You may modify to taste.
Here it is…something with chocolate in it! Enjoy!

Brownies with Raspberries and Vanilla Ice Cream
What a yummy dessert that’s fast and simple. All you need is one package brownie mix, some fresh or frozen raspberries (approximately 1/2 pint) and a little vanilla bean ice cream.
Prepare and bake the brownies according to the package. When done baking let cool on a cooling rack.
Put the berries in a bowl and add a tablespoon of sugar. Set at room temperature until juice comes up. Then stir and refrigerate until serving time.
Slice the brownies in 1/2 inch thick slices. Add a few scoops of ice cream. Pour the berries and juice over the top. Be sure to serve the brownies slightly warm.
I love dessert. All kinds…especially if it has chocolate in it. But when the fresh fruit is in season, I love dessert with fruit in it. And the most classic dessert I can come up with that has fruit is one of my favorites….
Strawberry Shortcake 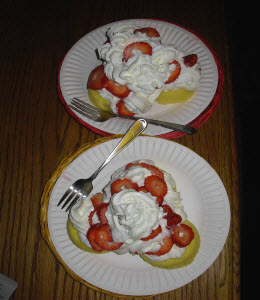 Take the most freshest strawberries and wash them thoroughly. Then thinly slice them using a sharp paring knife. Place the the slices into a bowl and sprinkle some sugar over them to develop the juice. Let sit for about an hour.

For the cake part, use dessert cups, pound cake or angel food cake. Place the cake/cup on a plate or in a bowl. Spread real whip cream over the cups, and then add a layer of strawberries. Pour some of the juice over the top. Add more whip cream and then garnish with strawberry slices as desired.