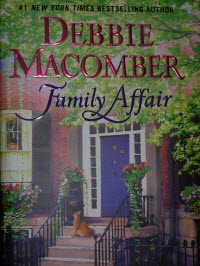 A favorite author of mine, Debbie Macomber, brings back an oldie, but a goodie. Her short story entitled,"Family Affair" is a delightful, fast-read about an Abyssinian cat, named Cleo and her owner, Lacey.
In order to recover from a painful divorce, Lacey decides to hunker down in her San Francisco apartment with cat Cleo. The bad news is that she has a noisy neighbor who also has a cat...named Dog. Unfortunately she can't ignore either of them due to an unexpected encounter between their two pets.
Jack is attracted to Lacey, but he has problems of his own. How can he
pursue his feelings for Lacey when he has a sister who he is constantly arguing with about her own love life.
This really was a fast read. Something to take your mind off your daily troubles. You can never go wrong with a book by Debbie Macomber!