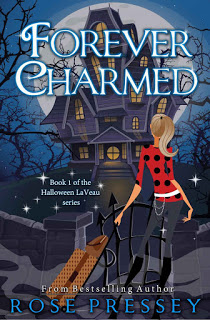 A bewitching name, an empty house and a sacred book. What does this all add up to? Another delightful story from Rose Pressey, simply one of my  favorite new authors!
In Forever Charmed, Halloween LaVeau, so aptly named and with a family lineage of witchly proportions she is about to move into something bigger than she ever dreamed...LeVeau Manor! Well, it' a bit more complicated than that.
Throw in two very handsome "alive" guests to her newly christened B&B and a few other fun characters to make a very exciting and fun read.
Ms. Pressey never fails to delight. The story is not sappy and has a  drama to it. It was almost difficult to put it down because I just had to see where Ms. Pressey was going with the story.
There were just so many delightful moments...best friend Annabelle's dislike of the manor, referring to it as the "epitome of creepiness", the mysterious people who kept showing up at Hallie's door,
the awakening of some talents that long since seemed like were never
going to amount to anything, and the two hotties that seem to hate each
other but insist nothing is wrong, yet seemingly each wants to get her alone to convince her of something.

I found the story to be fast paced, and at moments, very exciting. It took awhile for all the details to come together, which made the reader have to stick around to the end. And what an end it is!
It looks like this is a first book in a series. I hope that I won't be disappointed. However, since I have read Ms. Pressey's previous series, I doubt that will be the case. Looking forward to the next chapter in Halloween's life!