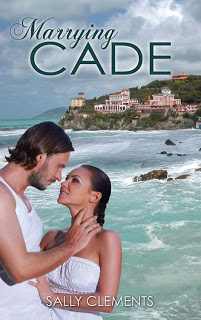 I'm still not used to reading books in a PDF or Kindle format (despite the fact that I received a Kindle for Christmas!) I really love the feel of a book in my hands; flipping back and forth between the pages when I want to reread something. So when I decided to make Marrying Cade by Sally Clements, my first book review for World Literary Café, I was a bit skeptical if I would enjoy it. However, I found Sally’s story of two teenage friends becoming reacquainted as adults a fun and easy three hour escape from the household chores beckoning me away from my computer.

Hoping it would be more than just the same old romance themed short story, I was pleasantly surprised to find a bit of backbone to it. Cade has grown up to be a very successful hotelier, while Melo has gone on to become a strong, independent and successful financial advisor. They both returned to her island home for the wedding of Melo’s sister, Rosa, to Cade’s best friend, Adam.

Melo is the one person the family has counted on to take care of everything, including the entire planning and orchestration of Rosa’s wedding, but her father still won’t let her be a part of the family’s wine business. While this may seem a bit archaic, I found it to be plausible because as many of the older generation still feel that the woman’s place is in the home.

Cade has come a long way, literally and figuratively. He’s made his way back from losing everything to having almost everything. Now that he sees Melo, he realizes that he wants her. But he just doesn’t know how much he wants her.

I found that Melo’s sister Rosa, was a spoiled, selfish brat, and to be honest, the story wouldn’t have held together as nicely as it did without her being this way. There were moments I really wanted to throttle her so badly that I had to contain myself. I love the way the two sisters play against each other and as twins, it’s nice to see the ying/yang of their relationship.

I was thrilled when Melo finally stood up for herself in front of the whole family to let them know she was not going to be a pushover anymore. I think you could call this the “You go girl!” moment of the entire story. From that point forward, I knew that she was going to do whatever it took to make sure she wasn’t going to lose anything her family had worked so hard to attain.

The question begs, "Do they get together?" Well, I won't tell because I don't want to ruin the story, but let's just say the road to get there is very interesting. At 176 pages, this was the perfect length to escape the everyday doldrums of life. Put this on your “To Be Read” list for an afternoon getaway.