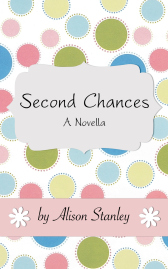 I took a chance on reading a Christian-based inspiration romance book. I generally don't like to mix the themes because I find them to be inconsistent at best. Second Chances is Alison Stanley's first attempt in this genre, and the first book of hers that I read. Although,
I must note that I was ready to print my review, the author herself
actually contacted me and asked if I would read her second book and publish a review for that one first. I agreed, so please see my review below of her second book.

As for Second Chances, I must admit that my original thought about not reading mixed themes was on track. While Ms. Stanley's first attempt at a novel was not that bad, it wasn't the best. My biggest obstacle was language. As an American, I have the privilege of living in the melting pot of nationalities. However, an author's vernacular while seemingly charming when delivered in verbal form, it also has the ability to make or break a story when it comes to the written word.
In terms of the actual story, simply put, it is about two friends and their desire to find suitable husbands.
One of them, Hannah, is already engaged but happens to meet someone from her past that brings up
some not so pleasant memories that could potentially destroy the
relationship she is in. The other, Rachael, who has carefully planned
her life, realizes that she has the opportunity to take a chance and
step out of her normal routine and pursue a relationship that may not be
suitable for her. Coincidentally, there is also another guy who is interested in her. Hmmm, now she has the big dilemma. Actually, they both have problems that need to be addressed.
On one hand, Rachael's story was somewhat predictable,  and unfortunately, due to the duo stories going on here, it didn't have the opportunity to expand on some of the necessary detail to make it more complete. Hannah's story, on the other hand, offered a surprising twist to what would have otherwise been a bland and boring account of another perfect relationship.
I believe that by having two stories told in one novel shortchanged both as there wasn't enough time to expand on the stories beneath the stories. Separating the two would have allowed for each of the girl's journey to be more fulfilling for the reader and answered some of those questions that were left up to our imaginations.
As a Christian-based story, this book is probably not suitable for pre-teens or young teens. I would recommend that parents read the book first to assess whether they want their child to read it or not.