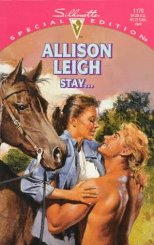 In Stay by Allison Leigh we learn all about the power of family and how one lucky girl got to grow up surrounded by five boys, while not her blood brothers, they were her brothers in every other sense of the word. And how the love she felt for one of the boys would never fade away, no matter how hard the father tried to keep them apart.

Jefferson Clay, the middle brother, is back home after being for a long while. When his father falls ill, he returns to be with the family and try to heal from an injury he’s suffered. Upon arrival he comes face to face with the girl his father had forbidden him from and which was the reason he left.

It’s been ten years and Emily Nichols is all grown up. Her love for Jefferson has never died. Now all she has to do is convince him to stay, and show the family she can handle it.

This book is book one in a series called, Men of the Double C Ranch. I found it to be a really easy and relaxing read. I didn’t have to think much as it just flowed from beginning to end.