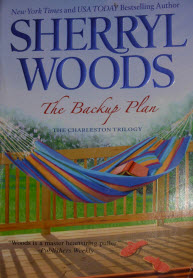 Back so Sherryl Woods again with another novel...The Backup Plan. Wow...let's get right to it with a deeply moving story about how one person deals with tragedy and it's aftermath. The good news: Reporter Dinah Davis is back home after being a foreign correspondent for a number of years. The bad news: She's lost her edge after suffering a traumatic experience. Now that she is home, she wants to enact her "Backup Plan". Unfortunately the other person that was a part of this plan is no longer available.While she tries to make contact with the guy she left behind, she has to deal with his brother, her meddlesome mother and her well meaning friend.
The man of her dreams,  Bobby is in business with his brother Cordell. He's out of town but the "bad boy" brother is right there and in her face. Desperate to find her old boyfriend, she goes to see Cordell. He does everything he can to make sure that Bobby and Dinah stay apart because Bobby has moved on with his life and found someone else.Cordell wants nothing more for Dinah to move on with her life and include him in that plan. What follows is really Dinah and how she must deal with not being able to put the backup plan into effect. Things are starting to turn out completely different than what Dinah had expected. Not only does she have to deal with her past, what happened while she was away, but also with the dynamics of letting a new person into her life. And this guy was definitely "not what she planned".