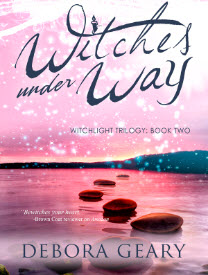 As with the rest of Ms. Geary's books, I just had to keep reading after I finished the last one because I needed to know what was going to happen with Lizard and Elsie.
Lizard is starting school, that's to the help of Witch Central. She's also working for Lauren who has been called upon by Witchlight to aid in Lizard's growth and understanding. Meanwhile, Elsie, who has been working with Nat at the yoga studio, struggles to find out who she really is. In the meantime, she's found another outlet in the form of knitting and has made some new friends at Knit A Spell.
Each are starting to come into their own but still have a ways to go as they struggle with their own personal demons and with living together and within their new community. While Aunt Jennie still guides them, she has recruited some additional help from Witch Central, Lauren and her best friend Nat.
Character development continues in Witches Under Way as we see more and more of who Lizard and Elsie really are and why they came be as such. In addition, we are seeing a bit more of the leaders of Witchlight and finding out who they are and their importance to the development of Jennie.
The reader is drawn into the story in a way that makes it almost impossible to put the book down. I can imagine myself there right along with the rest of the community, although not saying much, but just there experiencing everything as if I was one of them.