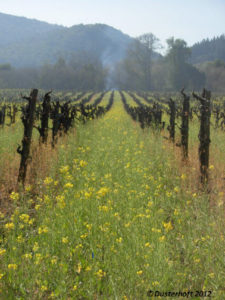 I feel guilty. Sonoma County, the area I have called home for the last 19 years, went up in flames in the wee hours of the morning on October 9, 2017. While I was preparing for an orientation of a group of new hires, others were fleeing for their lives. I was completely oblivious until I received that fateful text message.

The winds had been blowing throughout the night. It was nothing new. Sometime between 3:00am and 3:30am, the power kicked off.  I woke up because I am a light sleeper. Figuring the wind knock down a tree and landed on some power lines, I just sighed and rolled over falling into a restless quasi-sleep thinking about the day ahead. At 5:30am, the power kicked on and shortly thereafter, my husband and I got up and dressed to go to work. We each left the house that morning thinking it was life as usual.

The Text Message That Changed Everything

Just shortly before 7:00am, I pulled into the parking lot of one of our other offices; the location of where orientation was to be held. I heard my phone buzz with a text message just as I shifted my car into park. Without even turning the car off, I reached into my purse to get my phone and check the message. It was from my boss telling me to get to the hospital quickly because she thought we needed to cancel orientation. Confused by the message, I threw my phone back into my purse, turned the car around and headed to the hospital.

As I passed one of the local gas stations, I was stunned to see the line up of cars. I knew at that moment there was something wrong, so I high-tailed it to the hospital. Upon my arrival, I went to the conference room, saw my boss and asked what was going on. One of my administrative colleagues who was there said, “You haven’t heard? Santa Rosa is on fire.” I was stunned. She showed me a photo she took on her phone, and I couldn’t believe my eyes. I had no idea. We lost power at our house early that morning, but we didn’t think anything of it. We did not even bother to turn on the television because both of us left for work at the same time. Now, faced with the enormity of the situation, I went to my office and started to make the phone calls to cancel everything.

Left In The Dark

Throughout the day, I was completely in the dark as to what was happening. We had no internet or cellphone service in our small town, which means I was completely cut off from the outside world the entire day. I wished I had a radio, but did not have one with me. All the executives that made it into work were in the conference room setting up the incident command center. As a hospital, we have to be prepared for anything and everything.

Armed with little information I spent the day filing. What more could I do? We were all on edge and I could not concentrate on anything productive. Going home that evening, I was just sick about everything. Guilt-ridden because there was nothing I could do, and helpless knowing others were suffering.

What Are We Going To Do?

Once I got home, my husband had the short-wave radio on and I finally got more information.  Heartbroken and overcome with probably the worst anxiety I had ever felt, I did not know what to do. Neither of us did. Faced with the fact that we were cut off from the south end of the county by the fire in Santa Rosa, what if we had to evacuate? The roads to the west were closing due to another fire spreading through Napa County. There were fires in Mendocino County, and another one was starting directly to the northwest of us, near Cloverdale and Geyserville.  Where would we go? How are we going to get to safety?

The clocked ticked turning minutes into hours and hours into night with the wildfires still burning out of control. My husband and I tried to sleep, but tossed and turned. We both went to work the next day feeling no better than the day before. At least this time, I brought a radio with me, but it was a duel-edged sword. Providing me with more information, while making me sicker with each passing update.

By the time I got home that night, the look on my husband’s face was so grim. I had never in all our years together seen him look this way. He didn’t even want to eat, but I forced him and I to have a small bite for dinner. The clock continued to tick, and our evening turned into a repeat of the previous night.

The third day came bringing with it restored cellphone and internet services. However, not long into the morning, we received word that there may be a potential evacuation. I called my husband and told him to go home, then I left work myself to join him and gathered our stuff to put in the car. I felt so guilty. Guilty because I was given the time to pack while thousands of others did not have that luxury. This was only a potential “evacuation”, but there were real evacuations going on everywhere. I did not want to leave my life behind, my stuff behind. My husband just looked at me and said, “It’s just stuff. I can replace it. We will replace it.” The clock continued to tick away the minutes, and that night we slept in our clothes…waiting…waiting…

…waiting for the pounding on the door.

…and we both went to work the next day.

I put in long hours over the course of the next several days, and even came in both Saturday and Sunday that first weekend in order to on-board emergency help for our small hospital that was feeling the effects of all the wildfires to the south, west and north. We were all pulling together to keep things going. While some of my fellow workers were deeply affected by the fires, others were less so, and in my eyes took advantage of the situation by deciding to either not come in to work at all or just fleeing the area all together.  This irked me to no end.

So now, not only was I feeling guilty for not losing everything in the fires, I was angry as well.  There was even a small part of me that was jealous. I wanted to flee like some of my colleagues, and I couldn’t. Over the course of that week and the following one, I wrestled with the guilt, anger and jealousy, along with a raging case of anxiety. I hid all of it during the day because there was no time to deal with it until I went home. Each night I came undone. The pain was so intense; a repeat of two years ago (and frankly five and half years ago too), but this time it was there for very different reasons .

Figuring Out My New Normal

It’s been two weeks, and we finally have unpacked for the most part. The anxiety has lessened, but I still have random moments of crying for no reason. Is this my new normal? Will I be like this for the rest of my life. I don’t know, but I will eventually figure it out. Of course, I am still looking for a few things, and still coughing from the smoke inhalation, but a little less so. I still feel so guilty because I didn’t have to evacuate, didn’t lose my home or my belongings.

There is not much I can do to help, and that hurts me more than anything. For someone like me, who has spent their entire life helping others, it’s like the kiss of death. I am told to not feel guilty, but not feeling guilty is even worse for this good Catholic girl who was raised with the understanding that guilty feelings are the foundation of our lives. I am ashamed. I should not complain when I no reason to lament, unlike my neighbors who have lost so much. More guilt…it never goes away.

Sonoma County will rebuild because as everyone has been saying, we are #SonomaStrong. I imagine it will be years before it is all said and done, and I probably won’t be here to see it come to fruition. But perhaps years from now after I have left the area and moved on with my life, I will come back one more time just to be sure that all was put back to right before this horrible event took it all away.