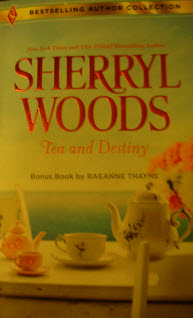 We met Ann Davies briefly in Miss Liz’s Passion, another book I reviewed by Sherryl Woods. This time we get to really know her and how she became the mom to a group of kids who really needed her.

I like the main character, Ann, because she is quirky and unique. She lives by her own rules…that is until someone else, in the form of Hank Riley challenges her in every sense of the word.

Hank, on the other hand, is a guy who never thought he could make a commitment to a woman. Now he is getting involved in her life but also the kids’ lives.

I especially liked the way the challenges of being a mom and pseudo-dad played into the relationship with Ann and Hank. It was obvious from the get-go that Hank was going to play an important role in the lives of some of the Ann’s children, especially the older ones since he seemed to make a connection with them.

I found a few comedic moments and a few predictable moments in the book, but overall I felt the story was believable. Although I wish Sherryl would have taken a few extra pages to develop the stories of the children in the story, I found that I stayed interested nonetheless. I guess I really wanted to find out if Ann and her quirkiness was going to mess with Hank, who in my eyes, was the quintessential man’s man. The good news is that from the moment of their initial sparring over groceries to the very end, I knew those two were in for it!

Wishing you all moments of great reading!