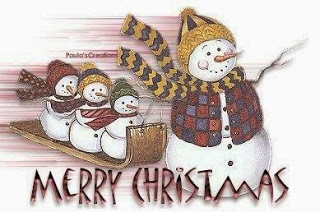 Yes, I am not proud to admit this; but I did have the unthinkable, a meltdown, on Christmas Eve no less. I would just like to say that it is not totally my fault. Here’s my story.
I got home early from work (Yay! A Rare Phenomena!) After a two quick stops; one for birdseed and the other for stocking stuffers and some nosh for the evening,  I was home by 3:00pm. This is unheard of for me, especially lately. The hubs was surprised to see me. In fact he said, “What are you doing home so soon!” It was almost like he didn’t want me there for some reason.
The night progressively got worse after that.
Apparently he didn’t feel well and I was automatically suppose to know that. Unfortunately, I didn’t since he was basically uncommunicative. Apparently, he was almost peeved at me because I didn’t make his Christmas cookies when he wanted them. Once again, he didn’t say anything and just sat there looking annoyed.
Sorry, but I am exhausted. I’ve been going nonstop for the last three months without a break. Taking six weeks off from work was not a vacation. I might not have been working at my job, but I was working 24 hours a day for six weeks straight as a caregiver. I don’t care what anyone says, that is work; probably the hardest work I have ever had to do. (For all you caregivers out there…you rock! I don’t know how you do it day in and day out. Thank you for all that you do…every day!)
Anyway, by this time, I was getting very upset so I badgered him until he finally told me what was wrong (besides the fact that he was completely congested). He said that he was getting really tired of being “last on my list.” I completely lost it! Yes, I lost it!
How was I supposed to respond to that?!?!? Thanks for making me feel like a big loser! It’s not like I am doing anything extra, I’ve just been working an extreme amount of OT and have had no time for anything personal. He’s off for three weeks and I am suppose to do everything? Seriously, I’ve barely had time to take a shower and go to the bathroom. I finally colored my hair after almost three months (BTW…I looked like hell with grey hair…uggh!)
I told him all this and he said that he knows and went on to say that “You’re not even on your list.” Needless to say, I was completely hysterical by this time. While I was crying, I told him I hadn’t even done half of the stuff I normally do this time of year. I was at a minimum three month behind on all my holiday stuff. At the rate I was going it would be St. Patrick’s Day before the Christmas cookies would be finished.
Not to mention the fact that my writing was virtually non existent, my craft projects were stacking up to the ceiling and the general state of the house was an embarrassment. I think I’ve made enough sacrifices here. I need time for myself but I don’t think it’s going to get any better for the next three months. I was just going to have to find a way to put him at the top of my list, even if it meant that I would have even less hours to sleep.
With my Christmas Eve Meltdown and his not feeling good and general crabbiness, we ended the night eating nothing and going to bed. Needless to say, I got up early this morning, did the dishes and made his Christmas cookies and a pot of coffee. I think I got about five hours of sleep…maybe.
As this holiest of nights comes to a close, I hope you all had the merriest of Christmases! I’ve just finished baking some goodies for the neighbors and cleaned up the kitchen again for about the fifth time today. Don’t worry! I made 4 dozen cookies for the hubs so he should be good for at least tomorrow. As for me, I’m going back to work in the morning, resigned to the fact that I am going to live in a perpetual state of exhaustion for the next three months.
In the meantime, I am going to try to fit “me” somewhere on the list whenever I can.
Wishing you moments to make time for yourself,