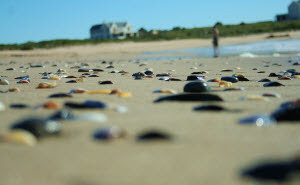 It was almost time…

Mike was confused. He woke up and found himself outside.

“What’s going on? Why is everyone out?”

Barry sighed, “Were you asleep during the meeting or what? Chief said we all had to be gathered here by 2:07pm.”

“I don’t remember that…he said something about…ah…weather…um… waves…but I just thought it was the same old thing. You know, go underground and stay inside, blah, blah, blah,” said Mike.

“You are so unbelievable! You never pay attention at the Clan meetings. If you weren’t so busy trying to hook up with that shell over there you’d know what was going on,” hissed Barry.

“Pay attention!” Barry barked quietly so as not to disturb any of the clan. They were all waiting in silent reverie.

“Take a look around…what do you see?”

Mike finally cleaned out the sand and looked around. “Whoa! Is that what I think it is? Dude, is that the nascent spray over there? Oh man!”

Barry couldn’t believe it. And this was his best friend. “Boy, I really need a new roommate,” he thought to himself. Somehow he knew that probably wasn’t going to happen. He was so sick of coming here. There was never anything to do except lay around and wait for someone to pick you up. Barry knew that this annual ritual of coming here for the summer was important to the clan. It was a sign of success when a clan member was picked up and taken away. As for Mike and Barry, well, they always end up going home… together. Damn.

The spray was coming in fast and furious and that only meant one thing. It was almost time…

The Clan was gathered.

They were all waiting.

Mike looked past the spray and saw it coming. He knew in an instant what he missed at the meeting. He looked over at Barry and started to shout, “We’re…..” and then it hit.

Barry, Mike and what was left of the rest of the Clan were all heading out. The big waves hit the shoreline and off they went. They struggled together in the aggressive water when the Chief rolled past them and shouted, “Just roll with it!”

They were headed home. Summer vacation was over and it was time to go back. Everyone had to go to work tomorrow. Barry and Mike looked at each other and decided to follow the Chief’s advice. With any luck, and if they rolled fast enough, they’d be home by dinner.