It was, indeed, going to be a long drive home. A drive that I had hoped to be an easy 2200 mile trek across the country. Heading to a brand new state, and a new (albeit temporary) place that was patiently waiting for us to move in. My hopes were dashed when we had an issue and I had to take over driving  when we got to Arizona. I prepared myself to drive some, but not 3/4 of trip. No matter how scared I was…this was how my next adventure was going to start. And, it solidified how much of a timid driver I really was, lol!

I was so grateful that we got out of California in one piece. With the smoke from the fires, the heartache of leaving behind 22 years of friendships and memories, and a husband who was not feeling his best but doing what he had to do to get us to a point that I could safely take over the drive; clearly, someone was watching over us. Looking at the beautiful sunset in the passenger side view mirror I knew that everything was going to be okay despite an unknown future. 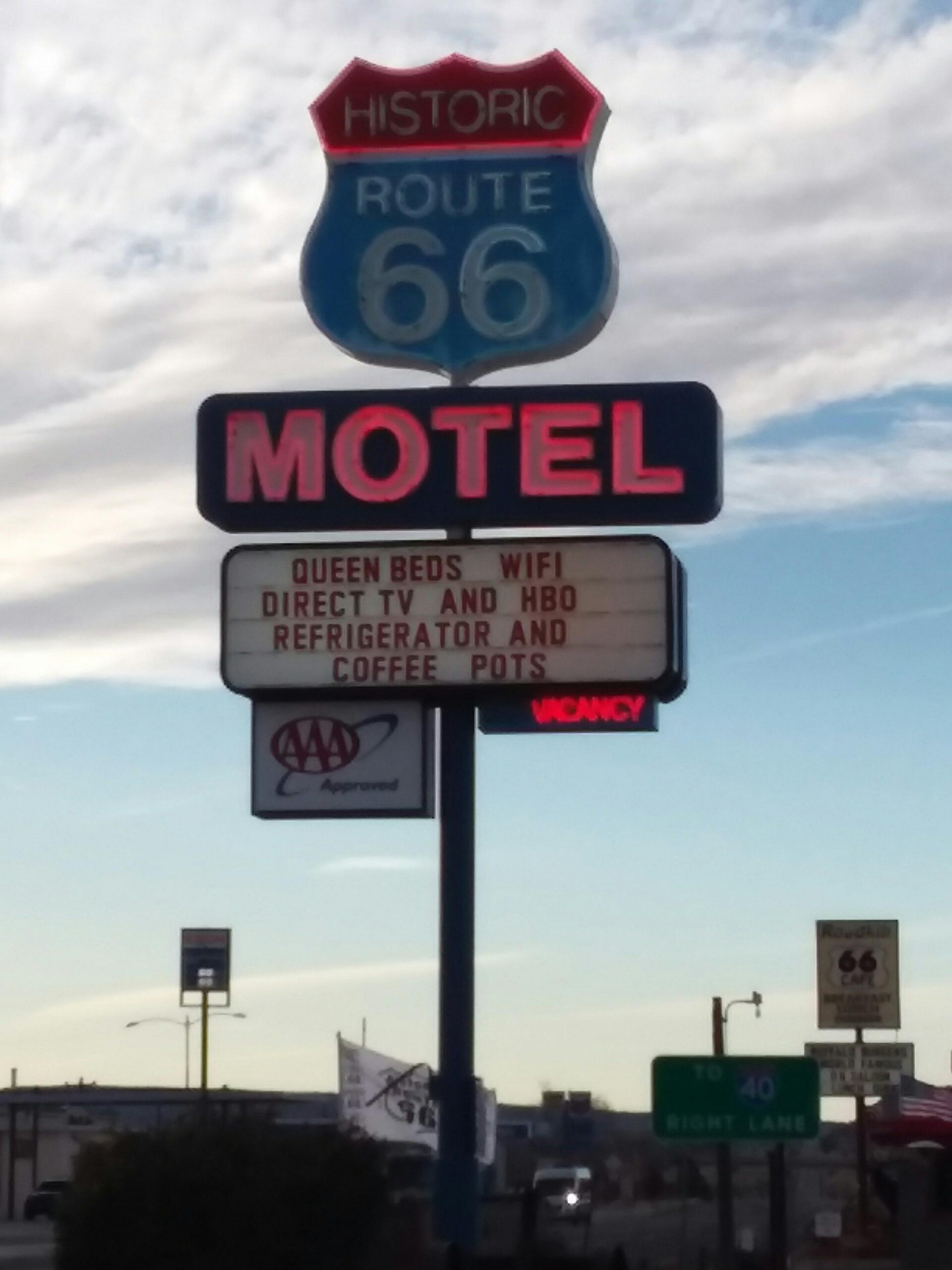 Our first stop outside California was Seligman. Why not stay somewhere on Route 66? We only lived in Arizona for six years and never did it before. So, it only stands to reason that as we leave the area we say, “We Were There!” and think back on our time out West with fond memories.

And I couldn’t resist taking a picture of Mader! 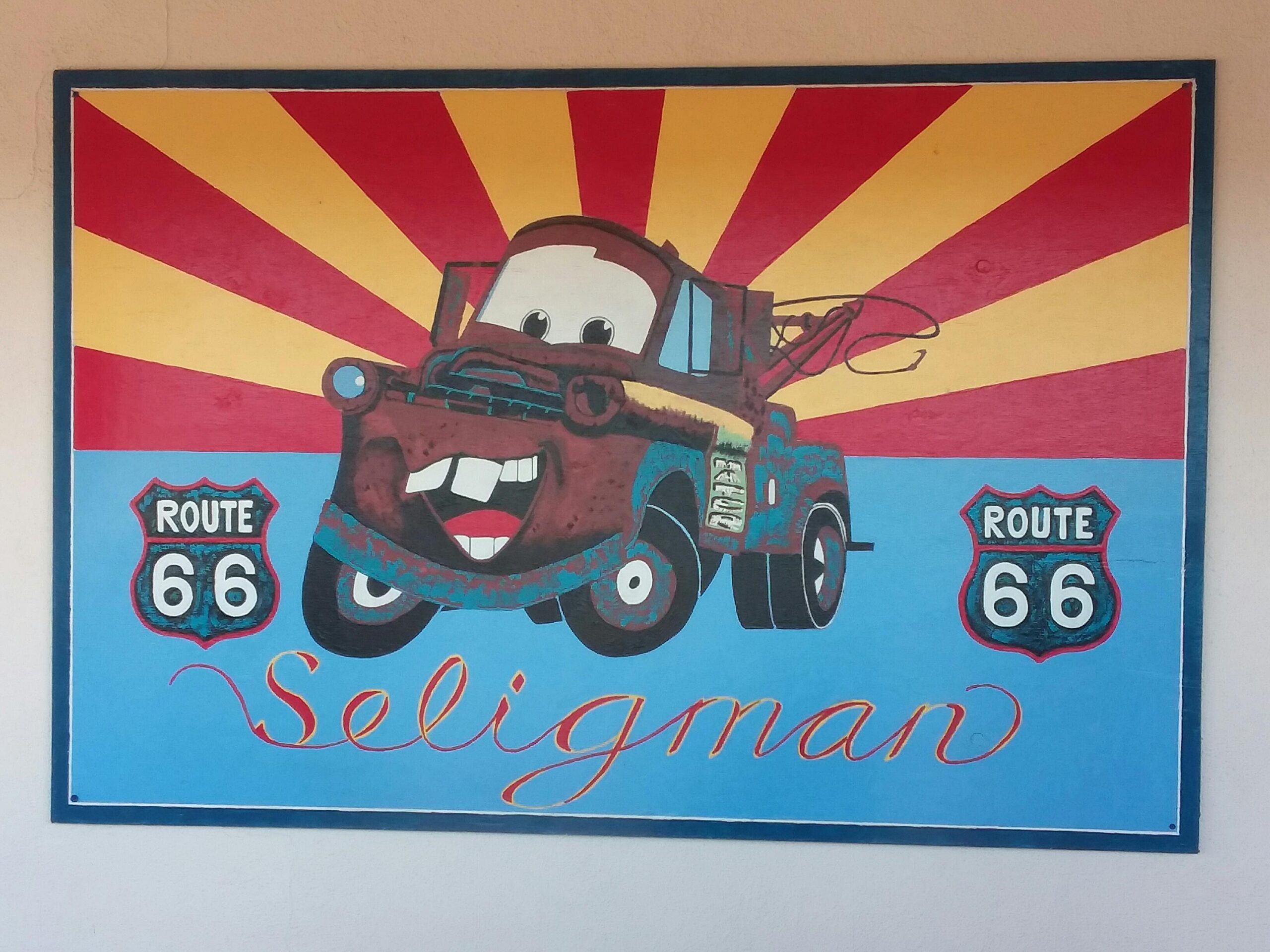 As we continued the long drive home, traveling through Arizona and then on to New Mexico, it was a good thing that we were moving during the week of Thanksgiving. Weather and construction delays are not a timid driver’s best friends.  We had to make extra stops so I could calm down and feel comfortable again to get back out on the road. Every night when we pulled over for the evening, I reached out to family, friends and my work so they could monitor our travels and be sure that we were safe.

Fortunately most of the roads were flat, and wound through open range. In fact, there was a long stretch of road that was really boring. (Hello Texas and Oklahoma!) It gave me the opportunity to relax just enough until the next long haul trucker went zooming past us.  Those semi-drivers are fearless! For the last several years, I drove less than two miles to work on the quiet streets of the small city where I lived. Driving on a major highway is a whole other matter. Fearless I am not; timid is more like it!

When it was clear that we were not going to make it to our place by Thanksgiving, we stopped for the night in Kansas, and had a traditional Turkey Day Feast ala Cracker Barrel.

Spending T-day in a hotel didn’t really bother me.  I knew that the next day we would be driving into Omaha. It would be our new home for the foreseeable future. Just a short 2 1/2 hour drive, we made it to our landing spot in one piece without sustaining any damage to the car or us. It was not an easy drive, but we were so thankful to have made it!

Although we desperately wanted to sleep in our new place on Black Friday, it didn’t make sense since we had no supplies and still had to figure out where everything was relative to where we are staying. So, one more night in a hotel it was for us.

After a week of driving through the windy plains, past the construction zones, navigating the big city highways, and dodging big rigs, we finally completed the long drive home. Half our stuff is still sitting in a POD somewhere, but we made it and are happy to be here. It has taken awhile to settle in and get comfortable. We had to take care of the issue that we ran into while leaving California. It’s all sorted now. Omaha has amazing services, including their healthcare.  I feel incredibly lucky to have this opportunity to work for the company that took a chance on me.