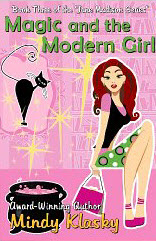 Okay!
So I read one quirky paranormal romance/mystery and now I can’t seem
to stop reading them. You’re probably thinking “Enough already!”, but
truthfully, I can’t seem to help myself. These days, my waking hours
are long and demanding and when I get home at night, I really need to
unwind with something that I don’t have to think about too much.
These books that I’ve been reading seem to be just the ticket.
Jane
hasn’t been using her magic. In fact, you could say she’s been very
neglectful. Her powers have dwindled, her books are fading, her bits and
bobbles are disappearing, and her relationships with her warder is
practically non existent. Not only does she have to deal with all of
that, but her Grandmother is getting married, her best friend finally
has a boyfriend, and Jane thinks she’s finally found her guy!
So
what’s this Modern Witch to do? Well she’s going to have to pull out
all the stops and get help from everyone in order to make things right.
She creates an Anima, named Arial, and of course, things go completely
wrong because she doesn’t focus and just about loses all the magic she
has left! What a mess! Now Jane needs to convince Grandma, her mom
Clara, her familiar Neko and David, her warder and protector, to help
her.
The
rest of the story lumbers along, and doesn’t move at the same clip as
the previous stories. It took me a bit longer to get thru it and
sometimes I found my self skipping ahead just to get to the good parts.
The interaction between Neko and Jane was limited, due to Neko moving
out, and the same with David, but due to the mere fact that Jane hasn’t
used her magic.
It
was interesting to see Jane get a boyfriend who she could finally open
up to, but I didn’t see that relationship going anywhere. It was so
obvious that she had feelings for David, all the way back to the first
book in the series. But nothing keeps a reader interested more than
unrequited love or in this case, indecisive love.

The
climax, naturally, happens at Grandma’s wedding! But since I don’t want
to give away the story, I will just end and say, that if you’re
following the series, you will need to read this in order to find out if
Jane gets her magic back or not. Rating: