The hardest part about moving is the packing. This wasn’t going to be easy. It’s been 20 years since we made a move of this magnitude. Now we are about to pack up our entire lives, leave our home in Healdsburg, California and and ship ourselves 2500 miles back to the Midwest.

E wanted to be very methodical in packing. I wanted to take it in stages. Combining both our ideas meant we were going to put some of our stuff into long-term storage. The rest would be moved using a professional moving company. To make the first part happen, we had to make arrangements for a POD to be delivered to our place. 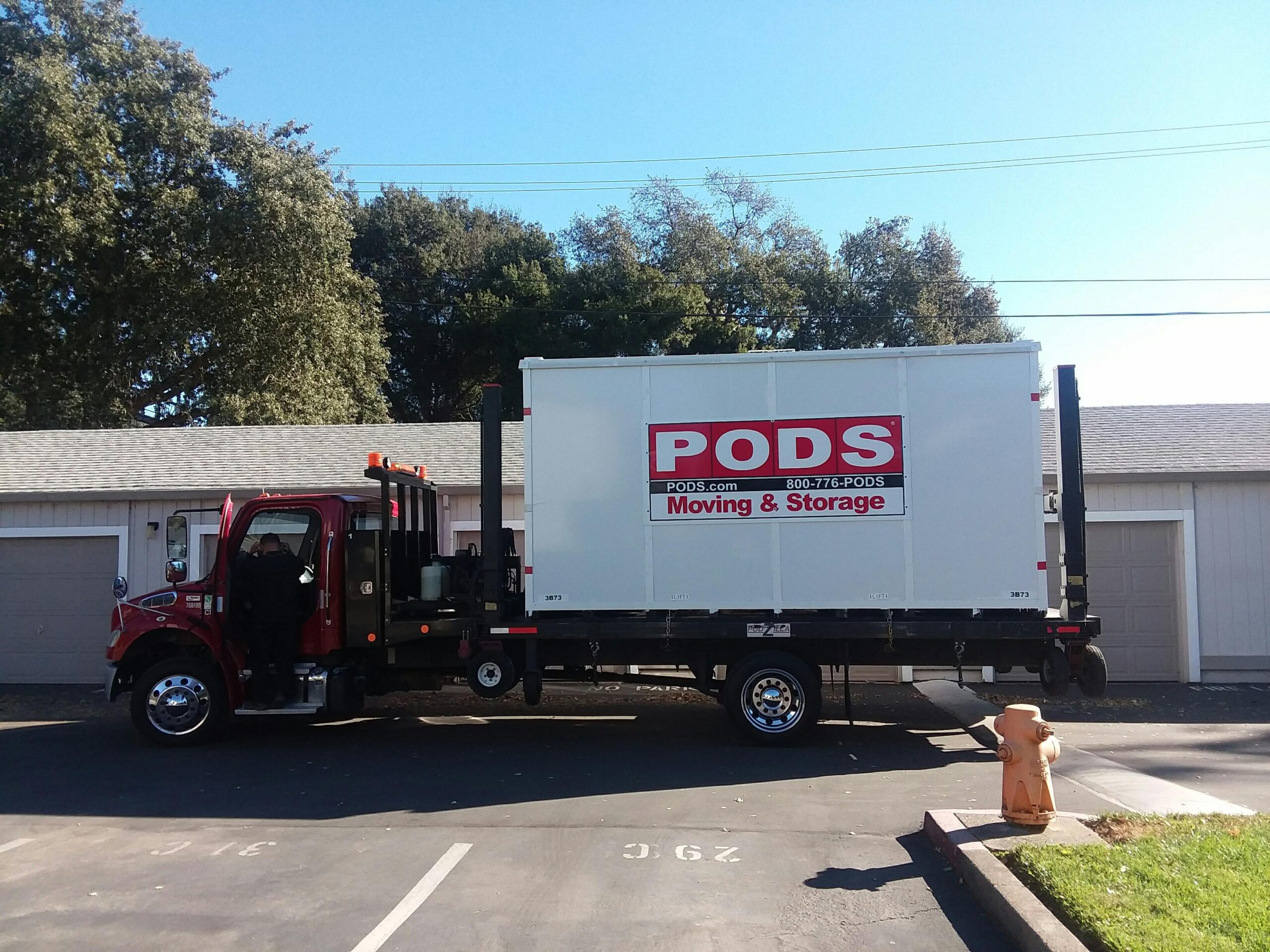 It’s a little scary watching your life change in an instant. Even more, I was awestruck at how easily the driver maneuvered the POD into my parking spot the day it arrived. Within a matter of minutes, I knew things would not be the same.

We spent the next three weeks packing and loading up the POD. When I say we, I mean E loaded up the POD. And believe me, it was not an easy job. I know because I packed a lot of it and hauled it downstairs. We just under-estimated how much stuff we had, and it took much longer to get it all sorted. I think he moved things around in the POD at least three times. Ultimately we were not able to get everything inside. At that point, we said “Ok, the rest is either going on the moving van or it’s getting tossed.”

We tossed a fair amount of stuff, and the rest was packed. In fact, we continued to pack for a few more weeks, and when moving day arrived, we still were not done. It was a mess. The movers survey the house and estimated we had at least 40 more boxes to go. Really?!? 40 boxes?!? They left to call the head office. I was still packing, and stewed for at least an hour while nothing happened with them. I finally got fed up with no action, so I called the office to inquire what was going on.

At first I was a little upset with the lack of communication from the movers, but while I was talking to the office, they told me they were trying to get ahold of us. Unfortunately our phone had already been disconnected and no one on the moving crew thought to tell me to call the office directly.

After a heated start to the conversation we all realized what was going on and quickly made arrangements to get additional help. The amount of stuff we had was just too much for two people to pack alone during a pandemic. Twenty years older, several injuries and arthritis later, we honestly did the best we could. E and I had simply run out of gas to make it to the great packing finishing line.

Thankfully, the moving company sent two guys, and with a combined total of 10 hours, finished for us.  After the day we had, we were too tired to do anything else; we spent the night at a hotel in a neighboring town and agreed to meet the movers the next morning.

Moving day finally happened bright and early the following day, and the entire contents of our home was moved out in about six hours. Stuff we couldn’t take with us was put in the trash,  and we were done living in our small condo.  We met with our landlord, and showed her all the things that needed to repaired. Truth fully, the whole place needed to be gutted. Given the fact that we had lived there almost 22 years, we told her to keep the deposit and put it toward the repairs. She was shocked but completely gracious.  We also left her our refrigerator, microwave, vacuum and some cleaning supplies.

After a final walkthrough with the landlord, we said our goodbyes to Healdsburg, California, and started the long six day journey to Omaha, Nebraska. We had said goodbye to those we were leaving behind in the days leading up to our departure. However, I felt sad and a little deflated as we drove out of town. There was no big fanfare. No hugs. No one physically there, standing on the sidewalk, to wish us well and say “Safe travels!” Stupid pandemic. At least we had text messaging (a big Thank You to Mariane and Jeanie for your love and support!)

We left as quietly as we arrived…and made it as far as Petaluma, California (twenty miles away!)

#embracethechanges, and stay tuned for Part 6 of My Next Adventure.