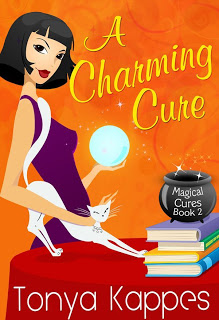 June’s all moved in and settled into her new life at A Charming Cure in Whispering Falls. She seems to have accepted her new “talents” and begins using them for the good of her customers. But now it’s time for her to really hone her skills and Great Aunt Helena, the Dean at Hidden Hall, A Spiritual University is here to help
Great Aunt Helena! Wow, here’s a surprise for June. She didn’t even realize that she has any living relatives, and now she has to go to school!
It is at this point I became disappointed. The references to various other stories, both fictional and real, made this particular story a little less believable
for me. Okay, so June only had to go to school for four days, but
still, I can’t help but wonder how the idea of a “hidden” school came to
be in the first place. Hmmm…can anyone think of anything? Oh say, something that has been around for at least a decade. Something really popular…can anyone guess?
The storyline of Good-Siders vs. Dark-Siders in A Charming Cure could have been just slightly more exciting and original…starting with the names. Although Ms. Kappes did a fairly good job in hiding the secret of who the real “bad guy” was up until almost the very end.
The most disappointing and the thing that practically killed it for me was the reference to “Jeffery Dahmer”. This was completely unnecessary and highly disturbing to use this in a book that could be read by a younger audience. I grew up and lived in the same town where this man committed his crimes and to use his name in a book is inappropriate, inexcusable and a disservice to the readers. The story did not need it and even if it did, I am sure that there were other fictional references you could have used.
Leaving that point aside, Ms. Kappes develops the cast of characters even further and introduces us to a few more which will become important in the next story. Although Tonya does a fairly decent job in her story writing, this particular one didn’t do anything for me except annoy me with the lack of originality and finesse she showed in her first book. I hope the third one will be better. Rating: