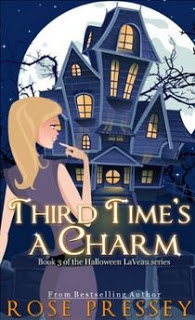 Halloween LaVeau is back in the next installment of the series. This time she is being challenged as the rightful owner of the Book of Mystics and the leader of the underworld. Hmmm…not sure she wanted it in the first place, but now that she is, I’m pretty sure she’ll do whatever it takes to keep the book and her new-found presence in the community.
The book picks up where the previous left off. And like before, I found that I couldn’t put it down. As I turned each page, I hoped for a resolution, but felt Hallie’s frustration as she sunk further into the mystery as to why she was being challenged yet again in so few weeks since she found the book her grandmother left her.
Of course, having two men vying for her attention who just so happen to be half brothers is not so bad. It does, however, make it difficult to solve the predicament she finds herself in again. She has to figure out what is going on soon and do it while still getting her magic skills up to speed as quickly as possible.
I have to wonder though if she will ever be able to improve her magic. While initially her inadequacies were charming, after this third installment of the series, I would have hoped she would not have to stumble around so much. Overall, I liked the story, and as part of the series, it helps to continue on with the events that are happening. Hopefully the next book the readers will find Hallie more sure of herself and her abilities. Rating: